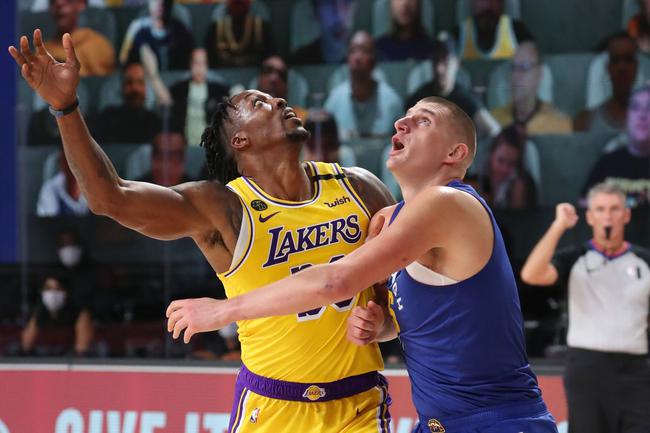 Beijing September 24, the matchup between Lakers center Howard and Nuggets center Jokic became one of the highlights of the Western Conference Finals. Howard not only tried his best to interfere with Jokic on the court, but even when he was off the court, Warcraft did not forget to "harass" the opponent.

According to "USA Today" reporter

On Monday, local time, Nuggets guard Jamal Murray was being interviewed. At this time, Howard came over. Murray quickly "warned" Warcraft not to make trouble: "Not now, not now." Howard smiled and said, "Jokic, what is his room number?"

Previously, NBA legend Chris Haynes broke the news that Howard used "reporting dish name" to interfere with Howard in the second game of the series. It is reported that when Jokic was in confrontation with Brother Thick Eyebrow, Howard on the sideline yelled "Thanksgiving, steak, appetizers, potatoes, a glass of champagne" to Jokic, and wanted to distract him. .

In the third game of the    series, Howard constantly used close guards and trash talking to interfere with the opponent when he was facing Jokic.

According to Los Angeles Times reporter Dan Woike, Howard once called to Jokic before the game: "Joker (Joker, Jokic's nickname), Batman is coming to you!"

Speaking of "fighting" with Jokic, Howard said: "For me, as long as I step on the field, I have to let him know my existence. We live in the same hotel, and I might meet him when I go out. I want him to know that I will lock him in for the entire series. This is the sense of competition that exists in me, and there is nothing wrong with it."

At the same time, Howard also expressed his appreciation for Jokic in an interview. "I like him very much," said Warcraft. "He has his own game rhythm and will not be affected by anyone. He can do anything on the court and is an all-around player. I like to play against him."